I have a fantastic circle of friends. Every week on Friday mornings a group of us meet for breakfast at a local diner. It’s not a strictly defined group, there are some that come once in a while, but there is a core of us that is Always. There. We never miss it.

The Ramblin’ Palates are ready to go!

Here we are. From the left is Cary, me, Kosta (my husband), Di, and Tammy. The only one missing is Val, but we met up with her on our way.

It just so happens that this core group also happen to be foodies. Which is how the Ramblin’ Palates came to be. We decided that every month or so we would journey to a restaurant out there in the state of Florida that has a reputation for great food. Today we took a trip north and inland to the little town of LaBelle, FL for lunch.

We have so much fun together. There is much laughter, usually near to the point of someone wetting themselves. On our drive to LaBelle we took two cars because there were to be six of us. But fifteen minutes into the journey Tammy calls us and to inform us this is unacceptable and that we must all ride together. So we drop our car in the Target parking lot and squeeze into Di’s SUV. We thought it was a tight fit then, but when we got to Ft. Myers and picked up Val? Let’s just say it may have been slightly illegal how there were four of us crammed in the back seat.

We arrived in LaBelle at the The Two Peas Cafe. Tammy had lived in LaBelle during high school so she knew the ladies who owned the place. They are famous for their pie, which is the most important food group, in my humble opinion. I will take a piece of pie over all other sweets. My mother makes me a birthday pie every August. The day after Thanksgiving can always be counted on as being outstanding because there is always pie for breakfast. You get the idea.

The restaurant isn’t fancy, but the ladies who work there are welcoming, friendly, and the food was awesome. Since October it is Breast Cancer Awareness Month the Two Peas Cafe was awash in pink. There were t-shirts, pink hair, and pink ribbon cards that could be obtained by making a donation.

Di made a generous gift to the fund and we all wrote on ribbons for our loved ones who had cancer. Some survived, some did not. But all of them were fighters.

Lunch was excellent. After perusing the menu Cary and I decided to split entrees. I ordered the fried green tomatoes and she ordered the garlic cheddar burger and we each ate half. The burger was good, but the tomatoes were out of this world. Tangy, crispy, and lightly battered. YUM.

Everyone was happy with their meals:

Kosta and his Patricia Melt 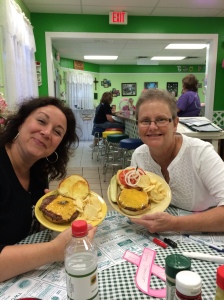 Cary and Di with their burgers

Val and her Hoppin John

Dessert was divine as well. All of us save Kosta had the coconut cream pie. Di, whose family is from Kentucky, informed us the proper way to pronouce it is “cokernut.” To think I’ve been saying it wrong all these years!

Kosta decided to be the rogue (Black Sheep is his middle name) and had the last slice of apple pie in the house. It was served up like this with the rest of our pies:

And then one of the owners saw what he had and squawked in dismay. She told him, “Honey, give me that pie and I’ll show you how a fat girl eats it.”

She took away the sweet little slice, plump with apples and fragrant with spices. When she returned it was warm, had 2 scoops of vanilla ice cream, and was drizzled with caramel sauce: 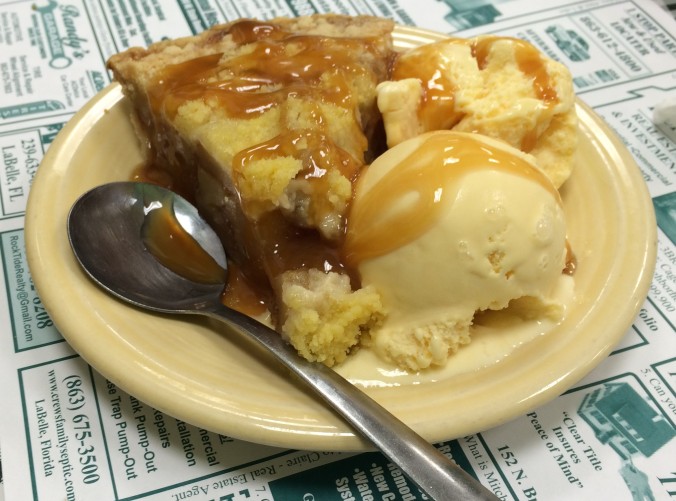 What was once an ordinary piece of apple pie was now transformed into a hedonistic, diabetic-coma-inducing masterpiece.

You know he ate the whole thing. Minus one bite that I stole.

The pie doctor and one of the Two Peas

The self-proclaimed “fat girl” told us the story of how Two Peas Cafe got its name. The two women who own it have been best friends their whole lives. They were often likened to two peas in a pod. Regardless of good, bad, or the inveitable trouble they landed it, the two peas stuck together.

A delicious meal and PIE. What could be better?

The fun didn’t end there. After lunch Tammy and Val took us on a driving tour of the little town of LaBelle. We saw where they used to live, work, and go to school. We saw the church that has a tree planted in their mother’s honor. And then we turned a corner and found a pumpkin patch complete with corn maze! Naturally, a clown car crammed with adults hopped up on sugar needed to stop.

The Ramblin Palates before the mayhem…

Children of the Corn

The two ladies who were staffing the pumpkin patch must have thought we were all newly escaped from Happy Acres. There were several occasions when one of us had to walk away or risk peeing in our pants from laughing.  When we were posing behind the candy corn, I distinctly remember my husband shouting at Cary: “Don’t pee on me! Don’t pee on me!” Which of course, was not exactly helpful to someone with a terminal case of the giggles.

I’m sure the two ladies were glad to see us go. Especially since we didn’t buy any pumpkins.

The last stop we made in LaBelle was the Harold P. Curtis Honey Company.  They have been in LaBelle since 1954 and they sell all sorts of varieties of wonderful honey. Since the last time I was in LaBelle they have had an outstanding mural painted on the side of their building:

We popped inside for a look around. They have wildflower and orange blossom honey, as you would expect in Florida, but they also have mangrove, seagrape, and palmetto honey too. We all tasted the different kinds and Kosta bought some seagrape honey to take home.

So we packed ourselves tightly in the car and headed home.

The view from the back seat.

Stay tuned for next month’s adventure!

One thought on “The Ramblin’ Palates in LaBelle”