It is a weird week. Not a bad one, just different, schedule-wise. Kosta and I have taken tomorrow off to add to our already three-day weekend, so today is my Friday. But our usual Wednesday night person is on vacation so I am working the late shift to fill in for her. That’s why I got to go here this morning: 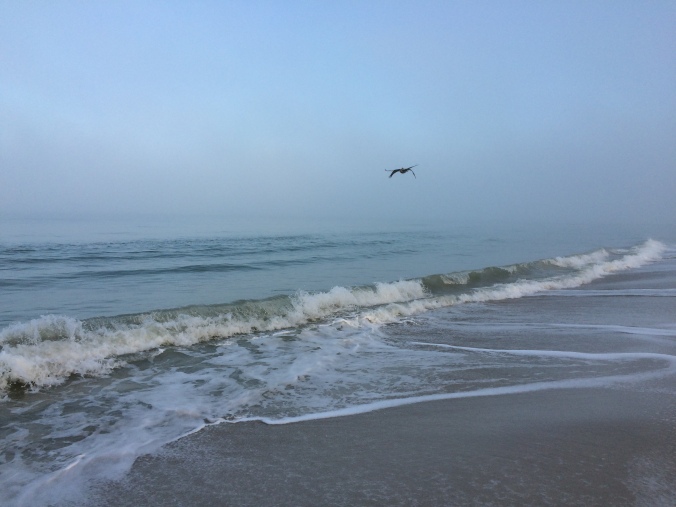 The beach in the morning is one of my favorite places in the world. It brings me back to myself when I’ve been living in my head too much. And I have lately, and here’s why:

My novel, Cloak and Dagger, isn’t selling. I’ve had lots of favorable feedback from different editors but no one has ultimately taken the bite. The thing I have heard most frequently is “I really love this book, but I couldn’t get it past my sales team because it is historical fiction.” Apparently while historical fiction is a huge thing in the adult market, it is a very tough sell in the YA world.

What I’ve been doing since December is taking out the first novel I wrote, The First Muse, and rewriting the beginning and editing the rest. I knew the first third had flaws and a tough time getting going, but I believe I fixed those issues. I am almost ready to send it off to my agent and see what he thinks about it. Trust me, I am terrified he won’t love it, but that’s just a little part of me. I know this book is good and the series has amazing potential.

It’s just hard, you know? Getting the agent was an incredibly grueling endeavor, but this part is no easier. The funny thing is, when you are searching for an agent, you get rejections. But when you ascend to the next level and your agent is sending your manuscript to editors, you get passes. Sounds a lot less awful, but really, it’s just as painful. Especially when the months drag by and you’re still waiting.

But I don’t give up. I will keep plugging away until I get a win. My agent loves my writing and at least one editor asked to see anything else I wrote. That is encouraging. If my contemporary fantasy about a kick ass group of girl goddesses doesn’t sell, I will dust myself off and write another book.

I expect to finish my final polish of The First Muse by Friday and then I’ll be sending it up to New York and crossing my fingers. I’m looking forward to some rest now that it will be with Alex. I’ve been working two full-time jobs really, and I’m exhausted. Even so, I know the work won’t be done, as I am sure he will have suggestions to make the story tighter. After all, I’m a talented writer, but not a flawless one.

Then it will go out into the world to be loved or rejected, and I won’t be able to do one thing about that.

Tom Petty said it best: The Waiting is the Hardest Part.

One thought on “The Waiting is the Hardest Part”