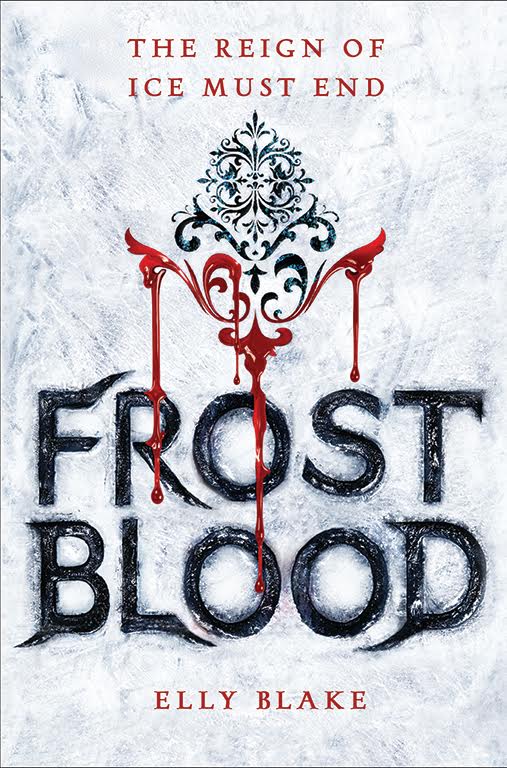 I am a sucker for a good fantasy. Magic, new worlds, adventure, and mystery are just the things that to me make a thrilling story.

Elly Blake’s Frostblood is a prime example of what I mean. Ruby is a Fireblood–she can control fire. But being a Fireblood is a big secret in her world. The Frostbloods, who can control ice, want to obliterate every last Fireblood and will stop at nothing to do so. When Ruby’s village is attacked she unwittingly reveals her true nature and is thrown in prison where she is tormented with buckets of ice water.

But then two Frostblood men arrive and tell her they will break her out of prison if she agrees to help them with a mission. She doesn’t trust them but is desperate to be free. She is taken to an abbey where she is healed and taught how to use her power properly, though most who know her true nature are frightened of her and the danger she represents as a fugitive.

And then there is Arcus. He is the Frostblood that freed her from prison. He hides behind a mask and is very reticent to share anything about himself other than what he expects of her. But a reluctant truce forms and they begin an unlikely friendship.

This book was so well done. The writing was outstanding and the story was well-plotted and satisfying. The sequel, Fireblood, comes out in September and I am ready for it NOW.

1. What was the original seed idea for your book? Did it start with a character, a situation, or an idea?

2. What is your writing process? Are you an outliner or a pantser?

I’m a pantser who wants to be a plotter. I try to plot, but I find it very hard to answer questions about character and plot before I start writing. I get to know the characters as I draft. So I know a few major points before I start, but the rest is a mystery until I have that messy draft. That’s when I focus on applying structure and plotting methods– during revisions.

3. Who are the writers which most influence your writing style?

There are many writers I love, and many writers whom I envy! I often wish I could write more like my favorite authors, but I’m not sure who actually influences my style most. I think when it comes to voice, most of our influences are unconscious. We pick things up from books we enjoy and it comes out when we write. A few of my favorite authors are: Marie Rutkoski, Megan Whelan Turner, Leigh Bardugo, Kristin Cashore, Morgan Rhodes, and so many more!

4. Do you listen to music when you write?

I usually listen to soundtracks: Tron: Legacy, Pirates of the Caribbean, Game of Thrones, The Dark Knight Rises, etc.

5. What are you reading right now?

I’m reading The Hate U Give by Angie Thomas. It’s so good! I just finished Caraval by Stephanie Garber, which was a beautiful read. (I also met Stephanie recently at a signing and that was a total thrill!) Next, I plan to read The Edge of Everything by Jeff Giles. I’m in a debut group so I’m reading a lot of 2017 debut books and loving them!

Elly Blake is the NYT bestselling author of Frostblood. After earning a BA in English literature, she held a series of seemingly random jobs, including project manager, customs clerk, graphic designer, reporter for a local business magazine, and (currently) library assistant. She lives in Southwestern Ontario with her husband, kids and a Siberian Husky mix who definitely shows Frostblood tendencies.

Ready for a thrilling fantasy?  Get your copy here: